Ahavas Achim-Lubavitz was a merger of two former East Side synagogues—Ahavas Achim and Anshe Lubavitz that made the leap from the East Side to North Buffalo in 1950.

Ahavas Achim-Lubavitz was a merger of two former East Side synagogues—Ahavas Achim and Anshe Lubavitz—that moved from the East Side to North Buffalo. A new sanctuary designed by Jack Kushin was erected in 1951 at 345 Tacoma Ave with a seating capacity of 900 people. Its modernist design with a distinctive flat rising façade formed of yellow brick, and large Lions of Judah and Star of David decorative embellishments exuded the confidence of mid-century American Jewry. The exterior was subsequently modified when the building became a church, but the cornerstone and decorative elements declare its first origins. The president Samuel Benatovich appointed Rabbi Alvin M. Marcus of Hoboken New Jersey as the newly merged synagogue’s first Rabbi in 1952. At just 24 years of age, married and with infant son when in arrive in North Buffalo, he brought a youthful dimension to his position at the Orthodox shul where services were traditional and conducted mainly in Hebrew. Alongside Rabbi Marcus, Cantor Morris Markowitz served the congregation until 1973 and Rabbi David Massis led the religious school.

Former members remember the separate seating for men and women incorporated along the sides of the bimah. The remainder of the seating, including the upstairs balcony, functioned as combined seating. The synagogue building had a large basement area where basketball games were played using retractable hoops, so that the space could function as an area for community events supported by its large commercial kitchen. The synagogue grew rapidly and in 1961, an addition for the religious school building was added. This space also functioned as one of the sites used by Kadimah School from 1962.

When Rabbi Marcus left in the mid 1960s, he was replaced by Rabbi Leonard M. Buchen. Although the synagogue retained its younger demographic, many of these families were living in the suburbs. Largely through their efforts, a school building was opened on North Forest Road in 1969. While it began as a religious school building, it eventually expanded into a new suburban synagogue of what became B’nai Shalom, and later part of Temple Beth Tzedek.

Rezoning hesitation by Planning Board delays projects in North Buffalo, West Side

Houses of Worship: A Guide to the Religious Architecture of Buffalo, New York: Ahavas Achim-Lubavitz

Houses of Worship: A Guide to the Religious Architecture of Buffalo, New York, James Napora, buffaloah.com

The congregants were immigrants from Russia, Belarus, Ukraine and Moldova, and other regions of the former Soviet Union who first arrived in 1989, and initially worshipped at another existing congregation. This group eventually became an independent Pentecostal church when they registered as the Evangelical Christian Church. They moved into 345 Tacoma Ave, in 2002. Click here for their history.

Since the Church moved away

After just over fifteen years on Tacoma, the Evangelical Christian Church of Buffalo left for a new site in North Tonawanda in 2019. The building was bought by a venture group who plan to redevelop the building into a residence for foreign students. As of 2020, this application is still being considered by the planning board. Ahavas Achim-Lubavitz Memorial Boards 2, created by Izon Productions-Don Dannecker, 2017. The image is reproduced with permission of the Foundation for Jewish Philanthropies. Ahavas Achim-Lubavitz Memorial Boards 1, created by Izon Productions-Don Dannecker, 2017. The image is reproduced with permission of the Foundation for Jewish Philanthropies. Ahavas Achim-Lubavitz School Addition-Cornerstone-1961 created by Izon Productions-Don Dannecker, 2017. The image is reproduced with permission of the Foundation for Jewish Philanthropies.

Ahavas Achim-Lubavitz Cornerstone-AAL Hebrew Text, created by Izon Productions-Don Dannecker, 2017. The image is reproduced with permission of the Foundation for Jewish Philanthropies. Ahavas Achim-Lubavitz Cornerstone-AAL, 1951, created by Izon Productions-Don Dannecker, 2017. The image is reproduced with permission of the Foundation for Jewish Philanthropies. Ahavas Achim-Lubavitz Star of David Close-up, created by Izon Productions-Don Dannecker, 2017. The image is reproduced with permission of the Foundation for Jewish Philanthropies. Ahavas Achim-Lubavitz Side View shows Star of David, created by Izon Productions-Don Dannecker, 2017. The image is reproduced with permission of the Foundation for Jewish Philanthropies. Ahavas Achim-Lubavitz Front of Former Synagogue, created by Izon Productions-Don Dannecker, 2017. The image is reproduced with permission of the Foundation for Jewish Philanthropies. 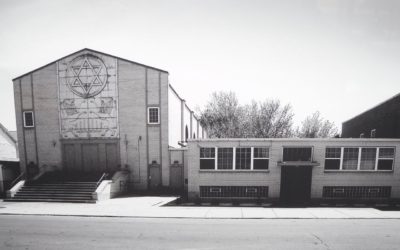 After he and his family moved to Buffalo, NY from a Displaced Persons (DP) camp, Wolf Blitzer was raised with his sister in Kenmore, NY. The family belonged to Ahavas Achim Lubavitz and its successor congregation B’nai Shalom, where Wolf observed his bar mitzvah. He graduated from Kenmore West High School and earned a Bachelor of Arts degree in history from SUNY Buffalo and a Master of Arts degree in international relations from JHU. He worked for the Reuters News Agency in Tel Aviv in 1972 and subsequently became a Washington, D.C. correspondent for The Jerusalem Post. In 1990 he began his long career at CNN, first as a senior White House correspondent, and later he appointed as the anchor of The Situation Room. Blitzer covered the Oklahoma City bombing, the September 11 terrorist attacks and several international wars.

We are seeking internal and external photographs, documents, film, mementos and written recollections relating to Ahavas Achim-Lubavitz community for digitization. We are also seeking photographs of the building when it functioned as a synagogue. The round-arched windows on the side with the Star of David decoration have been retained but its striking façade has been modified from its original design, as the contrast between the image taken by Sherwin Greenberg and a later one by Don Dannecker illustrate. If you have materials you’d like to make available for this purpose, please contact us.