Cecil B. Wiener was a woman of many “firsts” over a working life of more than fifty years. Born in 1874, Cecilia Bertha Wiener, known as Cecil, was the daughter of Magnus Wiener and Clara Brock. Privately tutored by an English governess, then educated at Central High School and the School of Pedagogy at the University of Buffalo, Cecil Wiener initially struggled with a career choice. Significantly for the era, her father Magnus expected her to be a scientist and her mother recommended a legal career, while Cecil wanted to be doctor. In the end it was the law that beckoned, in part through Cecil’s interest in women’s rights and her involvement in women’s organizations. She was the first President of the Buffalo Section of the National Council of Jewish Women in 1896 and served as a volunteer relief worker under the auspices of Temple Beth Zion. Her interest in relief and support to women and their children would remain an abiding interest as she advanced professionally in what became allied fields for her: Law and Social Work.

As one of the first two women to be admitted to the University of Buffalo in 1897, Cecil Wiener and Helen Zaidee M. Rodgers were also the first two women to graduate with an LLB in 1899 from the Law School. Cecil was subsequently the first woman to be awarded an LLM by her alma mater. She began her legal career at the legal firm of Shire and Jellinek created by Moses Shire and Edward L. Jellinek. After five years she struck out on her own, building her own practice and becoming one of only two women members of the Erie County Bar Association. In 1908, she changed fields, entering social work as the general manager of the Federation of Jewish Charities, a forerunner to the Jewish Family Service of WNY, which at that time functioned jointly under an early form of the Buffalo Jewish Federation. In the role of general manager for the next 24 years, she became nationally recognized as a social reformer who promoted training solutions, better health care and mental health counseling to address poverty. This supportive methodology recognized the totality of the person and avoided the case number custodial approach prevalent at the time. At the Jewish Community Building, which she also helped to build, she created pedagogical and life skills programs for children, and supported a nutritional and dental clinic.

During her service as Manager and then Executive Director of the Federation of Jewish Charities, she continued her professional training at the University of Buffalo, School of Social Work, and New York School of Social Work. In 1911 she was appointed to the Committee on Care and Relief of the Poor in their Homes. Subsequently, she was one of the first members appointed (and the first female) to the Erie County Child Welfare Board when that formed in 1915 and her position was renewed in 1921 and 1927. When the Erie County Children’s Court system was created in 1932, it was Cecil Wiener who was appointed its first Judge. In this role she was also the first women to hold a judgeship on the Niagara Frontier. She held this post until 1937. During her campaign for Children’s Court Judge, she ran on the byline, “The Place for a Woman and the Woman for the Place.” While the “Judge Cecil B. Wiener Non-Partisan Endorsement Committee,” that formed to help in her reelection was unsuccessful, she was a public figure who garnered respect across party lines.

Other civic roles included service as a member of Governor Herbert Henry Lehman’s Conference on Crime held in 1935 in Albany. This professional forum composed of government officials, attorneys, judges and law enforcement administrators, focused on growing concerns around rising youth crime and sought new ways to address crime prevention. Judge Wiener was known for innovations away from non-custodial management that eventually became the norm. She served as a member of the Executive Board of the Buffalo Council of Social Agencies and in 1938 she was appointed by Mayor Thomas L. Holling as a member of the Municipal Civil Service Commission. From 1937 to 1949, she served as a director and secretary of the Guidance Center of Buffalo and as executive director of the Jewish Federation for Social Service from 1942 until she retired in 1946.

Apart from her pathbreaking roles, the lists of her other activities were extensive as were the awards she received. She was an organizer of the Young Women’s Hebrew Association, a member of the Political Equality Club of Erie County, a member and treasurer of the Professional Women’s Club and president and director of the Buffalo Chapter of the American Association of Social Workers. She was a member of the Buffalo Federation of Settlement and Social Workers Club, the Town Club and the Zonta Club among others. The Buffalo branch of the American Association of University Women, presented its Achievement Award to her in 1950 and in 1959, the year before her death, the Inter-Club Council of Western New York name her Woman of the Year. She is buried in Section FF at Forest Lawn Cemetery in Buffalo. 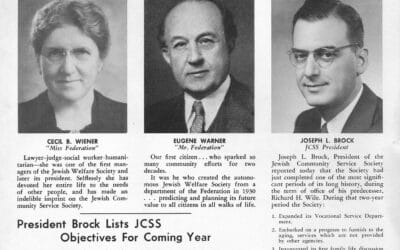 Articles about Cecil B. Wiener

To read the reports written by Cecil B. Wiener while Secretary and General Manager of the Federation to the Board of Governors from 1922 to 1934 consult Ms150.1Box 1 at the University Archives, at the University at Buffalo, NY.: