Louis Greenstein was born in 1886 in Buffalo at a time of significant Jewish immigration into the city. As a professional architect, he created commercial, religious, civic and residential designs that followed local Jewish migratory paths across the city and into the suburbs while blazing his own trail in design firsts. He initially trained as a draftsman in Buffalo with two architectural firms, first at McCreary, Wood and Bradney and then at Green and Wicks. By 1907, he had designed the first Buffalo city flag, demonstrating design interests beyond the built environment, a practice he continued throughout his life. A year later, in 1908, he left Buffalo to work for the firm Edgar E. Joralemon in the company’s New York City Office. This enabled him to study at both Columbia University and the Columbia Atelier of the Society of Beaux Arts Architects. In 1914 he returned to Buffalo and set up his own practice in the Guaranty Building while immersing himself in local professional architectural organizations.

At a time when Buffalo was expanding its built environment and growing beyond the city fridges, Louis Greenstein, incorporated both new construction and remodeling projects into his practice. He worked for a wide variety of clients both Jewish and non-Jewish and created a broad range of building types, and at the same time aided the next generation of aspiring architects with the establishment of the Buffalo Atelier Rectagon. For students unable to fund training in New York City or Paris, the local club connected a generation of students to local training at this Society of Beaux-Arts affiliate.

Early in his career, he designed the Coplon Family Mansion in Amherst at 4380 Main Street after WWI in the Italian Renaissance style. Aquired by Daemen College in 1956, in 1990 it was dedicated as Patricia E. Curtis Hall. In 2007, it was made an local historic landmark by Amherst Town Board. He would renew his ties with the Coplon family in 1961, when he was selected as the architect for Temple Beth El Religious school in the Town of Tonawanda, when David Coplon, one of the original commissioner of the Coplon Mansion, served as the head of the Religious School Building Committee.

In 1923, on rural fields located in Williamsville, before its development as a suburb, he designed the mock Tudor style club house of the Willowdale Country Club, the forerunner to the now defunct Westwood Country Club. This was quickly followed by Temple Beth David on Humboldt Parkway, back in the city.  While these were new builds, he also worked on what would now be regarded as an adaptive reuse project for Temple Emanu-El at Colvin and Tacoma in North Buffalo. Originally designed as a church, Greenstein reworked its interior and created a striking wooden bimah. In 1959 he designed Temple Beth David-Ner Israel (1959), in North Buffalo which later merged with Temple Emanu-El to form Temple Shaarey Zedek.

Alongside Jewish religious and civic buildings, he designed stores and manufacturing spaces including the Art Deco styled Lederman’s Furniture Store building in 1929 and Riverside Men’s Store in the 1940s after a fire destroyed the company’s earlier building. Active in design for a variety of clients, in the 1930s he was involved in the Kenfield Housing Project from 1935 to 1936 and the Niagara Memorial Park Chapel and Gates in Lewiston from 1937 to 1938. During the 1940s, a notable renovation project was his work on the Seeberg Building at 121 Genesee Street in Buffalo.

In addition to his architectural interests, he was also the designer of local masonic regalia for Perseverance-Suburban No.948. This unusual connection was part of his activities in a wide range of organizations, professional and fraternal, that he established, led or guided over many decades. Despite a long architectural legacy some of which is still intact, Louis Greenstein is most remembered for his design of two flags for the City of Buffalo, as well as it’s official seal.

Louis Greenstein was interned at Forest Lawn Cemetery in 1972 within the Aaron Family Mausoleum constructed by the William Crawford Company, Buffalo, NY. For records relating to Louis Greenstein at Forest Lawn, enter name at this link For images relating to the Aaron Family Mausoleum, burial place of Louis Greenstein.

END_OF_DOCUMENT_TOKEN_TO_BE_REPLACED

Hoist a Piece of History: Louis Greenstein and the Buffalo Flag

Hoist a Piece of History: Louis Greenstein and the Buffalo Flag, By Joey Duggan, Associate Historian at Preservation Studios, The Preservation Exchange.

A Closer Look: Curtis Hall, a mansion with historic roots The flag is also available as an open source image at Wikipedia. 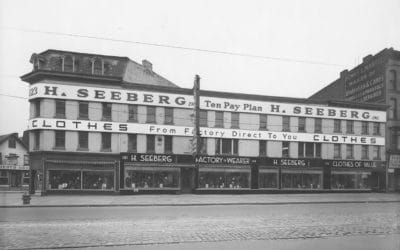 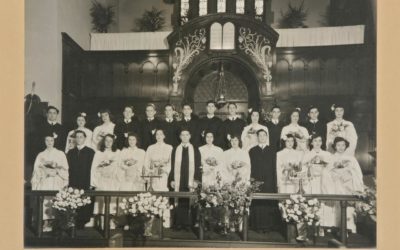 Our thanks to the North American Vexillological Association, the Buffalo History Museum, Harvey Schiller, the Foundation for Jewish Philanthropies and Temple Beth Tzedek.